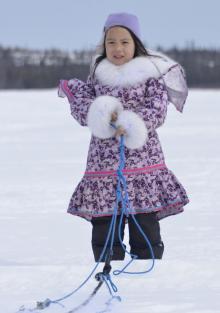 Myrna Pokiak, makes a variety of Parka's for sale. The most commonly made parkas are for newborn (bunting bags) to young children. Myrna also makes adult parkas that are used for hunting and winter traveling. Parkas are used in the winter in the arctic and made for arctic weather.

Myrna was taught sewing from her mother, Maureen Pokiak. The patterns are from her mom, who was taught how to sew Inuvialuit style clothing by a variety of Inuvialuit women from Tuktoyaktuk, NT, including her mother in-law Lena Pokiak and a sister in-law, Nellie Pokiak. In addition to the parkas made by Myrna, her sister Rebecca and Mom also work with Myrna to sew parkas of all sizes.

Parkas are made out of down, plucked and collected from the geese harvested in the spring time along the Tuktoyaktuk Peninsula and a very valuable item on a parka. The fur used to trim the hood is from a variety of animals hunted or trapped in the Arctic. Some of the furs used are fox, wolf, and wolverine. Fox fur is primarily used for trimming children's parkas and wolf and wolverine are used for trimming adult parkas. Wolf and wolverine have a higher cost and the animals can often be more difficult to hunt and trap. Parkas are completed with a fabric outercover, with floral patterns for a girl and camoflauge or solid pattern for a boy.

Myrna also makes summer parkas that can be a pullover or sewn with a zipper, with or without a lining for warmth.

The price for parkas varies, depending on size and material requested. To give you an idea of the material costs and time it takes please see below:

The most cost effective parka is to sew with an alternative to down. A summer/fall parka is much cheaper as it does not require down or fur for trim.  A parka is a very important investment when living in the Arctic and can often be used over a few seasons or modified to fit growing children.