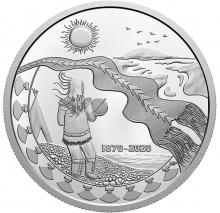 In 2019, Myrna Pokiak had the honour to submit a design in competition to represent 150 Years of the Northwest Territories joining confederation. Her design was chosen and in 2020 her coin launched. Every detail on the coin is symbolic of the North, the people, and the environment that has sustained the people through 150 years.

The deep roots Myrna has to the North, her inspiration, stems back to iconic landmarks, trails she’s traveled, places she’s visited, ceremonies witnessed, and people who will forever call the Northwest Territories home, the Dene, Metis, and Inuvialuit. She’s traveled the same trails by foot, dog team, and snow machine, on land and water just as her forefathers had.

Knowing the Dene, Metis, Inuvialuit, and Non-Indigenous today drink from the same water, fish from the same River, and travel on the same flow of the Great Mackenzie River of the Northwest Territories, her connection to her ancestors remain. 150 years earlier, this same River provided access when Canada declared the “North-West Territories”. The beautiful Mackenzie River, that flows from Great Slave Lake, and all its strength, ties together, like a sash, the people and communities from the South Slave waterways to the Sahtu weaving to Great Bear Lake, all the way to the Delta and Nunakput Region. The North’s history travels in the flow of the river to the ocean waves that ripple the rocky beaches and engraved within the land formations. Today, roads exist right to the Beaufort Sea and still, the Mackenzie River remains as a link between people and communities.

A significant piece of inspiration is the girl. She illustrates change in leadership, bringing forth the wisdom, patience, and knowledge that the North is witnessing today. As a young girl, Myrna’s father, James Pokiak and mother, Maureen Pokiak, ensured, instilled, and expected her to hunt, travel, and work, giving her independence, confidence, and strength. This is what Myrna see’s today, as a mother of 3 girls, as a supporter of newly elected female leaders, and as a woman who was raised on the land and sea in one of the most remote areas of Canada, Tuktoyaktuk, Northwest Territories.

My grandfather, Bertram Pokiak, told Judge Berger: “The North is my bank.” (1976). This statement illustrates the connection my grandfather’s generation had to the north that we continue to embrace today. The land, animals and environment are the foundation of the people, 150 years ago to 2020 and, as described in many Treaties with the Canadian Government, it shall remain so, “as long as the sun shines, the grass grows, and the river flows” (Treaty 6)

The concept in this art piece is centred around the landmarks, the Mackenzie River to the Arctic Ocean, which has sustained people since time immemorial to confederation and 150 years later. For myself, as a young child and for my own daughters today, the iconic Pingos, have always represented and guided my family home. It is much the same for other Northerners, stories about a River bend, outcrop on a hill, or a landmark built by our forefathers, all continue to guide us as it was 150 years prior. The land and water have nurtured us through some of the darkest moments in the history of the north, allowing us to survive, gain strength and momentum with knowledge passed down to each new generation.

The symbols chosen illustrate celebration through harvest, music, and pride, shining bright under the 24-hour sun. The ulu represents Inuvialuit, the tipi represents Dene, and the arrow pattern is symbolic to Metis, 150 years earlier and still to this day. There are 11 ulu’s, honouring the 11 official languages in the Northwest Territories, each unique to its own. The floral design on the young girl’s parka represents the lush and fruitful flowers that naturally grow throughout the North, trimmed with fur harvested from the land. The image representing thousands of migratory birds, in flight, connecting us to the rest of Canada and the World through the air we breath.

The girl on the coin, represents any one of my 3 girls, northern girls and their brothers, sisters, mothers and fathers, aunts and uncles, and grandparents, all instrumental in shaping us to be who we are today. 150 years is a milestone to celebrate and honour our existence, and the future of the North.

Its through drumming and dancing to the songs deep within this girl’s heart, and others like her, that keeps our history alive, celebrating life, our life in the Northwest Territories, Canada.